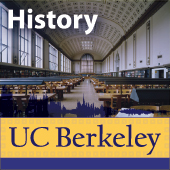 International and Global History since 1945

The license is derived from RSS keywords.

itunes.json and itunes.rss are the original metadata files. See the Archive Team page for more information about the archiving effort.

Reviewer: david.kit.friedman - - June 14, 2019
Subject: Lecture Transcripts Available
In part for stenography practice and in part out of curiosity and interest I worked on doing transcriptions of these lectures, and so can provide a link to the project here:

All of the lectures for this course have now been transcribed.

I was initially hoping that I might be able to obtain some sort of funding or paid employment for the project. I started doing transcription on Rev.com in early 2018 and although the work was basically okay the earnings were so exceedingly meager that I looked for an alternative.

I didn't get any traction contacting people at UC Berkeley, but I was nevertheless able to continue the project as a volunteer drawing on investment earnings and also very generous unsolicited cash gifts from my parents.

I think also that I found the lectures evocative of times in history when politics and international relations were more cordial, respectful, and circumspect than we have today in mid-2019. Although it is interesting to note how in lecture 26 the instructor speaks about growing political polarization in Europe and ties it to popular discontent following the financial crisis.

I didn't study history or international relations when I was an undergraduate at University of Virginia or a graduate student at Johns Hopkins (I was actually in computer science), but nevertheless, in my judgment, I think the lectures could be beneficial for people of different ages, interests, and objectives.

I don't think one necessarily needs any particular prerequisites or special training to follow the material. In my transcripts I provide links to Wikipedia articles along with occasional notes, and I think they could provide interesting context, but I would characterize them as more supplemental than strictly necessary for understanding.

I think that listening to the lectures and reading _A Superpower Transformed_ has had some influence on my world view.

I talked about what I heard and what I read with family members.

I read Tim Jackson's _Prosperity Without Growth_ a number of years ago, and I've also read _The Spirit Level_ and _The Inner Level_ by Richard Wilkinson and Kate Pickett.

In _The Inner Level_ Wilkinson and Pickett speak about how in the '70s and '80s progressive politics lost its voice and that under the economic policies of Reagan and Thatcher inequality increased leading to the growth of social problems.

Having practiced stenography alternating between speeches of Franklin Roosevelt and Ronald Reagan I know that Reagan hit the Democrats pretty hard on stagflation and economic woes in the 1980 campaign attributing them to bad economic policies. He also spoke warmly a number of years into his administration about how much over the course of his leadership inflation and unemployment were tamed leading to greater overall well-being for Americans ("they don't call it Reaganomics anymore"). Similar views can be found from various people interviewed in the documentary _The Commanding Heights_.

One way or another, having listened to the lectures and also read _A Superpower Transformed_, it seems to me that whether certain economic policy decisions turned out to be good or bad two of the significant forces involved were globalization (e.g. companies found it easier to set up factories in other countries undermining the power of organized labor) and also oil shortages.

One can get a sense of the complexity of things because in 1973 the oil shortage had in part to do with Middle East geopolitics and the Arab-Israeli conflict.

So in the lectures and in the book there is some discussion of that.

"The OECD countries -- the countries that are members of the Organization for Economic Cooperation and Development -- the rich country club -- experience an increase of about 175% in GDP per capita adjusted on a PPP basis between 1980 and 2009. And this is sort of a fairly respectable rate of growth. It means that I guess I'm better off today than I was when I was born, or my parents were when I was born. Our expectations in the West have increased over that span of time. In East Asia the transformations have been far more revolutionary than that. The average East Asian is seven times better off today than he or she was in 1980. This is a really dramatic, really stunning, increase in GDP per capita adjusted on a PPP basis."

It doesn't seem to me that well-being is necessarily directly related to GDP per capita. As Wilkinson and Pickett along with Tim Jackson point out across many different countries on a variety of different measures of well-being the increase tapers off with respect to GDP per capita. Beyond a certain level of wealth additional wealth may not really improve the society very much.

For an example one could look at life expectancy and GDP per capita:

Wilkinson and Pickett argue that within developed nations overall well-being has much more to do with economic inequality than it does with GDP per capita and I tend to agree with them. It seems to me altogether plausible and reasonable that inequality is a driving force behind a whole range of societal ills.

In lecture 26 the instructor speaks about the problem of large levels of government debt in the West. Franklin Roosevelt talked about this issue as well in a campaign speech on October 1, 1936 in Pittsburgh, Pennsylvania. One might wonder about whether a democratic form of government tends to lead to deficit spending and large levels of debt because elected officials need to keep constituents satisfied in order to obtain and retain their offices. In countries where there are less democratic forms of government it could be easier to maintain surpluses.

Anyway, I found the lectures interesting, and those are some of my thoughts on them. As I mention on the project website I'm accepting submissions of errata at my Gmail account email address.